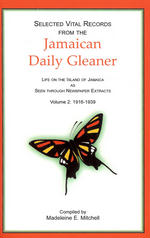 You can order the book directly from Heritage Books:History, Genealogy, Americana. Their Web page tells you how to order secure on-line with credit card, by fax or by 800 number.

This is the second volume of the first book of its kind to appear for Jamaica, West Indies. The compiler started extracting births, deaths, marriages and other events from the Daily Gleaner newspaper of Jamaica, West Indies in 1984. Her initial genealogical research for her own family later expanded to include the names of friend's families and other acquaintances.

The vital records included in this volume were taken mostly from microfilms and cover the dates from 1916-1939.

Because of the way the project was initiated, this is a "selected" rather than an exhaustive work. There is a bias towards St Ann Parish and Brown's Town in Jamaica, but all island events are included. Overall life on the island is reflected in the local newspaper and the variety of pieces extracted shows what is available in the newspaper of the time, a newspaper that started as an advertising sheet, with some foreign news and then developed a local flavor.

The intended reader is anyone who has an interest in Jamaican family history, but also the casual historian who wants to explore the evolution of a British Colonial island newspaper, without delving into the actual newsprint itself.

The full name index includes not only the names associated with births, deaths and marriages; but the names of people attending events like parochial board meetings and agricultural shows; as well as ministers who married couples, and sometimes the brothers and sisters and other family members of the married couple or the deceased.

The compiler has been researching her family history for over twenty-four years and has written books and the content of websites that she maintains on Jamaican genealogy.